The story continues of a wannabe clay pigeon shooter!

... and more fun along the way

...and a few disappointments!

I know most of this is pretty obvious to most, but the amount of times some of these terms were used in the early days .... and I had to use them, was surprising so I thought I would just add this since if you are reading this site you are probably a complete novice like me

Shotguns obviously vary quite a bit in terms of the action, whether or not they have ejectors, single and double trigger versions (mainly side by sides)

Parts of the gun

The pistol grip can be a different shapes and widths, some have comb raisers and rib raisers to help with aim and specific targeting etc. Stocks come in different lengths and are cast left or right  ldepending on how you shoot.  The amount of cast varies from gun to gun, the optimum cast you need depends on your personal shape and can be altered later if the need arises. 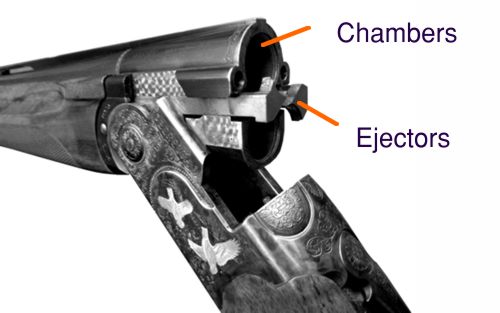 When you are looking to buy a gun I personally think it's well worth hefting quite a few to see which are the most comfortable in your hands and what sort of weight suits you best. Remember the more you lift the gun the lighter it becomes when your muscles get used to it.

Try to have an experienced shooter with you to help and advise since the shop initially is only generally really interested in selling you that gun.

I wish I had spent more time doing this to avoid the need for too many alterations later and gun changes.

The selector is used to choose which barrel fires first and to activate the safety.

Don't be confused with the varying gun types, here is a brief overview followed by and interesting video demonstrating that the gun type is not necessarily limiting.

Sporting guns are intended to be a good all-rounder for the varied targets, often are multi-choked and the weights vary.

Trap guns are usually mounted 'gun up', shot over long distances and don't require all the swinging around so are often heavier, have tight chokes, a raised rib, raised comb and longer barrels.

Skeet guns usually have shorter barrels, are lighter and have open chokes due to the targets being close and fast.

Game guns' usually have automatic safety, shorter barrels and are generally lighter, the reason being that you need to be able to carry the gun loaded, you need to be quick and maybe need to carry it around for a long time ready for that unexpected 'feathered' bird...(Your friendly gunsmith can easily change your safety to manual)

Trap gun versus Skeet gun for Skeet and Sporting?

Consistent gun mount is my nemisis so I choose to share with you here, all the little gems I have been given to help me by various instructors - everybody shoots differently but we all have to start somewhere.

I'm told you have a natural shoulder pocket where the gun sits happily when you mount it... I'm not so sure this applies to us all as I was told I have a funny shoulder and my gun mount appears inconsistent (I'm wondering if having extra lumps in that area are the cause of my problem but nobody is brave enough to have a probe around to help me

)  Either way mounting the gun in the same position is vital for consistent shooting I'm told, so a lot of practice getting this right is critical in my opinion.

What you see when you mount

I was advised that when you mount the gun you should only be able to see a small amount of rib - what is a small amount??? - absolutely no idea because aparently you should be looking at the clay and NOT the rib lol.  I also found that when I could see any rib at all when mounting the gun, I was shooting high consistently!

Pattern plates and Shotkams can help you resolve this but for me it is still a bit of a mystery and an ongoing project.

Comb raisers and adjustable butt plates can help you get this right with your particular gun.

Your leading foot (left if you shoot right handed) should point toward the place you intend to actually fire the gun and your other foot should be slightly back and at around 45 degrees.  This apparently means that you have maximum swingability when you pick up the clay in your sights and when you follow the shot through.

If you are shooting low targets such as rabbits (clay ones of course) your feet should be side by side and slightly appart - this is because when you swing the gun pointing down it draws a curve because of the way your torso moves.  I have to say this seems to work as rabbits are my best shots at the moment.

I was advised that your centre of balance should be forward and you should lean into and hold the gun tight into your shoulder so that when it fires it doesn't knock you backwards. Also the leaning into the gun gives a slightly aggressive posture ... KILL THAT CLAY!

Gun down or gun up?

You will almost certainly be taught initially to mount the gun before you call for the clay. To start with, there is enough to think about when you are sorting your posture, your mount, your hold point etc, without having to do it all at once after you have called for the bird!  This is the way I shoot still, but I've learned there are disadvantages particularly with longer high shots for me, since there are no reference points to give you a clue.  Of course you should have already seen where it comes from and it's general flight pattern, but trust me once that gun is mounted, it can catch you out.

Gun up your sight is limited and unless you want to be swinging around the sky looking for the target, you have to employ your peripheral vision to find it and make the final adjustments to your hold point before you pick it up clearly.

Pete shoots gun down and struggles when he tries gun up as it's not natural for him.  His mount is very consistent and fluid so he has full sight of the bird well in advance, picks his spot to shoot it as he mounts and moves in toward it.

My goal is to learn this method for some targets once my mount is consistent and everything else is second nature, but for now, gun up is better for me despite it costing me a few along the way.

Recoil is the amount of kick the gun gives you when it is fired.

This varies from gun to gun and some people seem more susceptable to it than others probably due to peoples individual build, shooting posture and fitness.

Rule of thumb: The heavier the gun and the lighter the shot ... the less recoil

I have been told on many occasions each force has an equal and opposite  - so if the gun is heavier it is able to absorb more of the shock, a light gun with heavy shot may not be very comfortable at all!

When firing a shotgun it is important to hold it in tight to your shoulder and push your cheek down on it so that your whole body absorbes the impact rather than it giving you a nasty kick and a bruise or three. This certainly seems the case since (apart from the odd lapse of concentration

) bruises and sore shoulders are a thing of the past thankfully!

Various types of recoil pads are available that fit to the butt plate of your stock to lessen the effects, this will of course increase the length of pull. Some are smooth on the face and others not, so be aware if you want to shoot 'gun down' a textured one may slow you down or get caught up in your clothing.

Apart from the guns themselves this has been our biggest investment and worth its weight in gold.

This is specifically designed mount on your gun barrels and to withstand the shock and the noise of gunshot.  Most of the cheaper alternatives will not last very long.

This camera records constantly while switched on but only saves the files 7 seconds before and after it feels the recoil of the gun.

It is fully configurable via WiFi and as standard comes complete with the mount for a 12g shotgun. Don't make the same mistake as I did by not getting the mount for the correct size barrels. You are able to configure the Shotkam to suit your gun, choose frame speed and decide between crosshair or dot amongst other things. The he clarity of the video is outstanding helping you to see just where you are going wrong ... or right lol.

Useful A to Z

Not so local but recommended

Personal views from the man of the house

Parts of the gun

Gun down or gun up?

Recommended for any beginner who isn't a natural